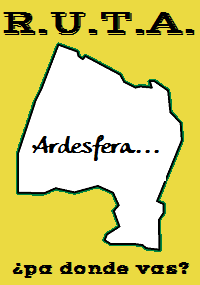 RUTA (an acronym of the Castellanese "Red Unificada de Transportes Ardesféricos") is an agency of the Ardespherian transport ministry which functions to coordinate all public transportation networks and systems within the Ardispheric Federation. In fact, the agency does not operate any routes or infrastructure itself; instead, it serves to provide a regulatory framework and an informational clearinghouse for route and infrastructure operators, infrastructure projects and public-transport-oriented development throughout the country.

One principal goal is to provide for a seamless transport user experience, despite that fact that most operators are private or public-private consortiums. RUTA works to ensure that routes are well-scheduled, transfers are convenient and reasonably priced, and that inter-modal travel well-supported. One remarkable achievement in this domain over the last decade has been the universal adoption of a smart-card payment system that works for almost all transport in the country, such that even taxis, convenience stores and airlines have adopted it, and the the TaRUTA (Tarjeta RUTA = RUTA Card) has become a kind of first step toward a cashless economy. In 2013, the next step in this was taken with Saehan's sunPhone RUTApp, which integrates the smart payment system with users' smartphones. Travelers can now be seen boarding taxis, buses, railroads subways and even domestic air travel flights merely waving their phone at an automated receiver.

One of the most well-known aspects of RUTA's work, for the general public, is the RUTA coding and classification scheme for routes and stations throughout the Ardisphere. All rail stations, bus stops, ferry terminals and public parking facilities receive nationally unique identifying codes. For "major stations" this is a 4 character code assigned mnemonically, and for "minor stations" (mostly single-route bus-stops, taxi stands or neighborhood bike-share facilities) it will be a seven-character combination of route-code plus sequence number.

All routes are also assigned a combination of letters and numbers, which are generally 4-6 characters (within the Villa Constitución, DF metropolitan area the first character is "V" and almost universally dropped in citation, thus most VC urban rail routes appear to be 3 characters but the first character V is assumed, thus, for example, MetroVC Line 1-Green Line is cited as S01 although its RUTA code is VS01).

RUTA's authority is divided into operating regions, defined at natural divisions between metropolitan areas and commuting patterns. By far the largest is the region defined for the area around the capital. The most important regions are as follows (in descending order of annual passenger volume):