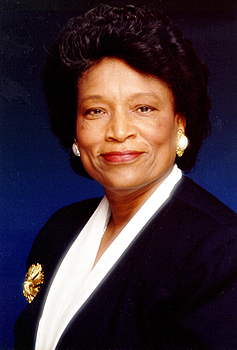 Costa Talante at the time she was elected to the presidency.
Zulema Costa Talante (born 1941, Villa Constitución, DF) was the 28th president of the Ardisphere, serving a single full five-year term from 1995 until 2000. She was a long-active member of the Partido Socialista when she ran, but she was a newcomer to politics, having served as a journalist, television producer and businesswoman prior to running. She said she had often thought of entering politics, but had always been busy with her career, yet her business successes combined with a dearth of suitable Socialist candidates in the early 1990s suddenly made her a plausible candidate for an entry to politics at the highest level.

Costa Talante's greatest accomplishment during her presidency was the Reforma Educativa, a massive piece of legislation that altered the relationship between the Federal government and the federal subjects in matters of education, guaranteeing government support for university-level education for the first time, making kindergarten mandatory and offering near-universal pre-K for those who desired it for the first time. Other accomplishments include a reversal of some the of the more controversial privatizations of her predecessor, and some minor inroads into the intractable issue of judicial oversight of local government.

After leaving the presidency after only one term due to some health issues, Costa Talante returned to running her broadcasting business, but continued to remain active behind the scenes in the Partido Socialista. In 2006, she flirted with a run for the Senate, intending to represent the Distrito Federal, but people questioned whether she was qualified due to some lingering health problems, and she withdrew in favor of another Socialist candidate prior to the primary election.

Due to a minor heart attack suffered during the 4th year of her first term as president, she announced that she would not seek a second term. Her Prime Minister ran for the Socialists instead, but his lacklustre performance meant that the Federalists captured the presidency in 2000.