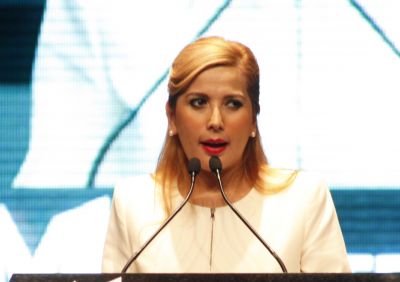 Ionescu addressing the AN in 1990, when she was still foreign minister.
Soledad Ionescu (born 1953, Orașul Aleatoriu, DS) was the 35th prime minister of the Ardisphere, serving most of president Dante Benengeli's second term as his cabinet chief, from 1991 until 1995. She had been his foreign minister up to 1991, but when the previous prime minister resigned in order to pursue elected office, Ionescu was chosen to replace him. She went on to serve briefly as Ardisphere's ambassador to the Assembly of Nations, and in 1996 she was elected to be the 6th Chief Secretary of that body, serving the single customary term until 2002.

As foreign minister, she was highly respected both within the Ardispherian government as well as the international community, proving both effective and the consummate diplomat. Her period as prime minister was less successful - it was only time she stepped away from her diplomatic career into the wider fray of politics, and she was not adept in the more rough-and-tumble of domestic politics.

Her term at the AN was marked by the ongoing crises in Commonia, as well as several other world events that tested the AN's capacity for humanitarian work, but by all accounts she met the challenges well.

Since ending her term, she took a post at the Universidad Nacional in the international relations department, but mostly she serves in various think-tanks. She has also remained active on various single-purpose diplomatic appointments and mediating missions.

Ionescu was born to a typical Karolian-Ardispherian family in the strongly Románš community of the Au River Valley in Departamento del Sur. She spoke Románš at home but excelled at languages and when she graduated high school with honors in not just Románš and Castellanese but also Ingerish and Gohangukian, she was recruited for a fast-track career as a military translator. She attended the Universidad Militar as a cadet, and graduated with degrees in linguistics and international relations in 1974, and transitioned into active duty.

Chief Secretary of AN