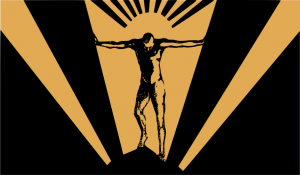 The iconic flag used by both incarnations of the Falange Vanguardista and still often flown at workers' rallies, strikes and political meetings.
The Falange Vanguardista (Castellanese, by custom cited untranslated; Ingerish Vanguardist Phalanx) in the Ardispheric Federation was a radical workers' movement and federation of unions active in the early 1900s. It later evolved into the modern Partido Socialista

The activist and radical Pancho Ulianof founded the Movimiento Unido de Sindicatos in 1894, but fell out with his co-organizers. Later, in 1907, he founded the Falange and managed to convince his former colleagues to join his new umbrella organization. The Falange adopted a radical position that included "violence when necessary" and several members were convicted of terrorism in the 1910s, but Ulianof always eluded the authorities, spending at least some of his time outside of the Ardisphere. Finally, in collaboration with Eva Shinoda starting in 1919, Ulianof began to moderate his position and by 1925 his Falange was subsumed under Shinoda's newlly founded Partido Socialista.

In the 1970s, an unrelated group of student radicals in Villa Constitución formed an identically-named organization and even adopted Ulianof's iconic flag. They conducted a series of terrorist acts both in the Ardisphere and internationally - most notably, the bombing of the Puente Memorial (connecting VC with Isla Lombrices, DC) in 1978, which was the most significant terrorist event in modern Ardispherian history. They were also implicated in the violent "Chocolero" riots of the following year in Peñafiel, DF. Several members were arrested and are still serving life prison terms at the federal prison at Venado, DS. Others have never been found. They were in no way directly related to the original Falange, however, and the Partido Socialista, then in government under President Luciano Vidriera, denounced the radicals. Nevertheless, it worth noting that most contemporary historians consider this "1970s incarnation" of the Falange to have been instrumental in pulling Vidriera's policy positions farther left than might otherwise have occurred, especially in the area of workers' rights and welfare policies.

The original Falange survives today in the form of the Unión de Sindicatos Ardesféricos (USA), the chief umbrella organization for various workers' and trades unions in the country, but this organization is not directly affiliated with the Partido Socialista.