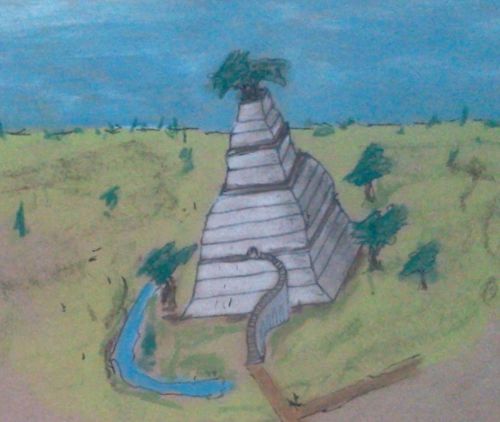 A sketch presenting an aerial view of the main ziggurat, somewhat idealized, by Altazorian artist Luciano Guerreromarchito.
Buyambá is a major Altazorian sacred religious site in the south-central Ardisphere. It is also a major historical archeological site, but Altazorian cultural preservationists have limited archeological work in the area due to the site's religious importance. Unlike any other still-functioning Altazorian religious site, Buyambá is not a restoration, but rather a continuously maintained site now almost 700 years old.

The site is located about 3 km southwest of the peak of Cerro Cuadrado, which is on the south side of the town of Fuerte Cuadrado, DC. It is about 100 km north of capital, Villa Constitución, DF.

The name Buyambá means something like "navel of the world", and according to most Altazorian religious and geomantic thought, the various "ley" lines that traverse the world have important intersections at this spot. At the time the site was first built, it was essentially an unremarkable spot in the shallow waters and wetlands south of the hill now called Cerro Cuadrado. Shamans "discovered" the location through divination and geomancy, and then Albalongans mobilized to land-fill the site and build the ziggurat.

The main ziggurat, called Gran Zigurat del Árbol de la Luna, stands mostly isolated on flat land. It stands about 50 m tall with several quite old oak trees cultivated at the summit, following Altazorian custom. It is covered with white plaster, making its appearance quite striking, especially from a distance, and unlike most Altazorian zigurats, it has a curved ramp up the first stage, extending out to the east. There is also a complex of smaller ziggurats and support structures about 500 m to the east.

Although classified as a Federally-protected archeological site and owned by the government, the ziggurat and the land around it is under the control of the Fundación Altazoriana Religiosa (FAR), a First Ardispherians relgious organization. Each year the important Altazorian New Year festival is held at the winter solstice (June 21). Other ceremonies including weddings and death memorials are also held there.