Askendom is no longer the second-largest in Mahhal. It may be a fairly small town. I'll work on this later, meanwhile it has been moved to the "unmapped" category. If you link to Askendom in the wiki or with e.g. airline routes, you will need to reconsider. I'm sorry for the inconvenience - the change is being done as part of the effort to improve the climate verisimilitude for Mahhal.

Askendom (properly Askendom Special Consolidated City, Mahhalian Askendom Mohhoak), Eman Prefecture, Oa Kingdom, is the second most populous proper city in Mahhal, located on the northwest corner of the island of Pillam, on the east side of an ocean inlet called Loas Juria. Despite being a major city, it is quite young by Mahhalian standards, and therefore it has no administrative role, being neither the capital of its kingdom nor of its prefecture. The land area for the Askendom Municipality (Mahhalian Askendomdemet) is approximately 245 sq km, and has a population of 2,104,000 (2014 est.). The "special consolidated city" (Mahhalian Mohhoak), is only slightly larger, with some bits of land annexed from neighboring municipalities, thus having an area of 256 sq km and a population of 2110000 (2014 est.). Including the surrounding metropolitan area, which includes the municipalities of Poara, Eman, Bylla Byllu, Lwlada and Mumidakipor, Askendom forms the heart of an urban region with a population of over 3,000,000.

The excellent old port, like most north-coast Mahhalian ports, is ice-free, and the sheltered bay is the result of a medieval engineering project that constructed a 700 meter causeway to an offshore island, thus creaing a breakwater and secure bay.

Askendom flourished and grew to its present size primarily because of a decision made in 1881 to open the port (along with a few others) to foreign trade, about fifty years before the more general opening of most other Mahhalian ports. This was done partly because the king of Oa was feeling left behind in the development of the rest of archipelago, and also partly to better capitalize on the nearby deposits of copper and iron, which exceeded the national demand for metal ores at that time. 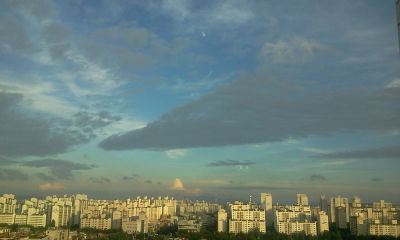 Modern development in the city's eastern districts, under a midnight sun in late December
Askendom has a maritime sub-arctic climate (Köppen climate classification Cfc). Because of its latitude, nights are more than 20 hours long in winter (June and July), while in summer they are only a few hours (December and January).

Askendom has several sibling cities, as per the guidelines of Sibling Cities of the World: